When it comes to UX design, one espresso machine wins

The interface of any device should be intuitive, but why not make it delight the user as well? 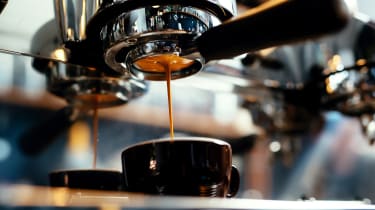 I love coffee. Or rather, I love making and drinking coffee not talking about it, bragging about it or agonising over equipment choices. I neither roast nor grind my own beans, and am a stranger to the burr grinder.

Instead, I work my way along Sainsbury's shelf of Fairtrade ground coffees (tip: Sumatra Mandheling is very nice). Occasionally, when I can be bothered, I go to the little guy in Delancey Street NW1 who employs gorgeous old-school gas roasters that give off sparks and fill the street with perfume.

I don't buy any coffee that has passed through the alimentary canal of a tree-bound feliform, and avoid those hipster blends that have the pH of battery acid.

I've owned almost every type of maker, from horrid percolator to Minimoka, over the past 50 years, but ended up favouring the espresso machine: living in Italy for 14 years will do that. I do not need to hear your stories about the AeroPress, and I've never owned a bean-to-cup machine because they combine the most irritating features of the laser printer and the photocopier: whenever you want a shot, some damned internal organ is either full or empty, and it tells you so on its horrid LCD display. I've had to buy several "desktop" espresso machines over the years their pumps tend to expire two weeks after the warranty does but still doubt I've spent the price of a bean-to-cup.

I hear you all mutter "What's all this got to do with computers? He's finally lost the plot...", but I do have a connection, and it's not just that programmers run on coffee.

The first book I ever had published was 'A Tutorial Introduction To Occam Programming' in 1987, commissioned by Inmos and co-written with David May. When I began writing, the only parallel demo program they could give me to work from was to run a coffee machine. A classic real-time, concurrent problem, how to run heater and pump while also handling user input. I never actually got to build a coffee machine controlled by a transputer, though, and it would have been way too expensive anyway.

As a result of this early experience, I developed a fascination with the user-interface of the espresso machine. Apart from switching it on and off, there are really only three things you need to ask of it, namely coffee, hot water and steam to froth milk.

You should be able to accomplish this with at most three buttons and lights, but it's astonishing what a pig's ear many manufacturers have made of it. Many try to skimp by only having two buttons or lights, which introduces needless combinations and confusions. Some believe a pressure gauge adds to the machismo, but if a machine doesn't already know what 15 bars feels like then it's a bomb rather than a coffee maker.

My last machine's pump conked out a while ago and I replaced it with DeLonghi's cute little Dedica EC680M. Narrow as a pod machine and beautiful in brushed chrome and black, its user interface was designed by someone who gives a damn and who ought to be teaching UX design in Redmond.

It has just three buttons with backlit icons on them that depict one cup, two cups and a puff of steam. There's no LCD display and no menu, everything being controlled by a simple protocol based on the state of these icons: unlit, steady-lit or flashing. They can flash sequentially to indicate programming mode, in which you can set coffee temperature, water hardness and auto-off period by a short press.

But the truly marvellous feature which set me skipping round the kitchen when I discovered it is the way you set how much coffee is delivered for one cup or two cups. Press the requisite button, hold it until it's delivered as much as you want, then let go and it remembers that until further notice.

Staggeringly simple, highly effective, almost biological, being the way that many neuronal operations behave inside our brains. It's also so simple as to be beyond the designers of much computer software. In 2017, I still encounter programs in both Windows and Chrome OS that won't remember the last menu option you chose, forcing you back to the top and rendering repetitive operations tedious.

Of course, no protocol is impervious to error and I'll sometimes press something at the wrong time, upsetting the sequencing. In that case, an error-handling routine is needed, and DeLonghi's designer chose the most sophisticated and most popular one there is: turn it off and turn it back on again.