Slick and speedy, with in-depth options that techies will love, but note the lack of support for US Netflix 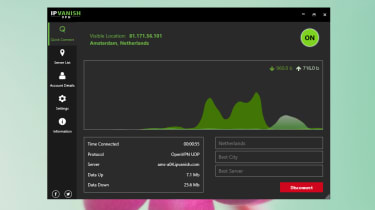 IPVanish has had a major redesign, but we suspect it will still appeal to its key target audience: technical users. Where some VPNs launch in a minimal, applet-style window, this one is a big, multi-tabbed affair full of bandwidth graphs and real-time info updates. Even the Quick Connect mode is more in-depth than usual, letting you select not just a country, but an individual server in a specific city. It's not difficult to use, but the emphasis is clearly on control rather than simplicity.

This makes it an ideal choice for advanced users who like to tinker. Want to change the VPN protocol or toggle different types of leak protection on and off? Go ahead. You can also choose to obfuscate OpenVPN traffic (to foil services that try to use deep packet inspection to detect VPN usage), automatically switch IP addresses periodically, or use IPVanish's own DNS servers for additional leak prevention. It's safe to say that, when it comes to privacy, IPVanish always goes the extra mile.

Despite its rich feature list, IPVanish is easy to get around. The Quick Connect mode gets you protected in a few clicks, while the server list lets you browse a mass of useful information, with proper search tools and options to sort the servers by country, response time or load. The map view that used to dominate the Windows app is no longer front and centre, but it's still there if you prefer to pick locations in a visual way. And while we're not quite sure what purpose the real-time bandwidth graph really serves, it looks pretty cool.

IPVanish boasts over 1,000 servers across 60 countries, and while the vast majority of these are in North America or Europe, there are also outposts in Brazil and South Africa, plus a decent selection in Asia -- particularly in Hong Kong and Singapore. Whatever your requirements, you shouldn't have any problems finding a suitable server, and it rarely takes more than a few seconds to make the initial connection.

Connection speeds are somewhat mixed. We found that short-distance connections, to servers in the UK and the Netherlands, retained between 83% and 86% of our regular connection speed, which is fine if not exceptional. Where IPVanish shines is in UK to US VPN connections: here we saw download speeds of over 22Mbits/sec -- a clear step ahead of NordVPN's 20.3Mbits/sec and Avast Secureline's 19.1Mbits/sec.

That makes IPVanish brilliant for US-based video streaming services -- aside from the unfortunate fact that the service is currently blocked by Netflix's ever-evolving anti-VPN measures. You should also be aware that speeds in Asia are far less impressive: when we tried routing our traffic via Hong Kong and Singapore, our download speeds remained stuck below 4Mbits/sec across multiple tests.

IPVanish states that it doesn't monitor, record or store any information on your traffic or your use of its services, and it also has a tolerant attitude to torrenting. However, the company is based in the US, so any information it does collect could be shared with various intelligence agencies -- including those of the UK. If that concerns you, a service based in another country might be a better option.

Price-wise, IPVanish sits roughly in the middle of the VPN market. It's not hugely expensive, with a $10 monthly plan and a discount $78 annual subscription, but some rivals are $10 to $20 a year cheaper.

So where does that leave us? Certainly, it doesn't knock NordVPN from its perch as our pick of the VPN services: it's almost as fast as IPVanish, just as reliable, and it's currently doing a better job of unblocking US streaming services.

Nevertheless, IPVanish is a polished, well-designed VPN with an impressive and highly configurable set of privacy features. Other services may be cheaper or faster, and some customers may be put off by the idea of US jurisdiction, not to mention the lack of Netflix. If you're looking for control, however, you'll struggle to find another VPN that comes close.

IPVanish is a polished, well-designed VPN with an impressive and highly configurable set of privacy features. If you’re looking for control, however, you’ll struggle to find another VPN that comes close.