Lancashire Police and Amazon's Alexa team up to fight crime 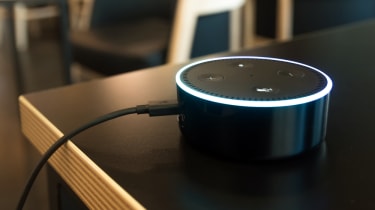 Lancashire Police has turned to Amazon Alexa to help get messages out to local residents, building an app to send any news updates to users of the smart speaker.

The voice-activated Alexa skill is available to download from the Amazon store and will provide hourly updates to those who sign up to receive the latest local news and information on their Echo device. It'll also beam pictures of wanted criminals to speakers in the area, for those users with an Echo Show, urging residents to get in contact if they have any information about the whereabouts of them or crimes committed.

"As a police force we are always looking at ways to engage with our communities," PC Rob Flanagan, Lancashire Constabulary's innovations manager said. "Alexa works alongside traditional policing methods to inform the public about the important issues in their neighbourhoods.

"Voice-activated searches now account for 10% of online searches and are expected to rise to 50% by 2020. We want to be at the forefront of this new technology to make it easier for the public to access the information they want to know."

Flanagan worked with developers at Amazon to come up with the application and, although neither he nor Amazon were able to predict how many users the new service would have, it's estimated that 11 million people in Lancashire use an Alexa-enabled device.

Lancashire Police is hoping that embracing new technologies such as the Echo to help with its crime-busting efforts will encourage new recruits. The launch of the Alexa app coincides with a recruitment drive for the police force, which will hopefully result in onboarding 200 new officers between now and next year.