Google: um, hang up on the idea of being "human", okay? 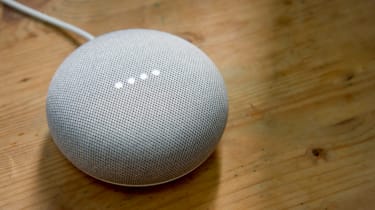 How do you know it's me writing this column and not some terrifyingly literate algorithm? It's not as if AI hasn't already branched into journalism.

Go to any financial news website and the vast majority of the stories about earnings reports will have been written without any human intervention. Sure, the style is dryer than a Jacob's cracker, but the algorithm doesn't call in sick, need a pension or drink heroic quantities of tea on the company's tab.

You know this column is written by me because no algorithm could write similes as weak as the one in the last sentence. There's something quintessentially human about my prose. It's grammatically imperfect, hackneyed, full of all the flaws that only a 40-year-old dragged up through an Essex comprehensive could get away with.

But the video I've just watched (below) makes me wonder whether the day when it's hard to distinguish between humans and AI isn't that far away, after all. The video in question is Google's demo of Duplex, the company's voice-assisted butler. Want to book an appointment at your hairdresser's between 4 and 6 pm next Friday? There's no need to phone Flavio any more - just tell Google when you want the appointment and it will ring on your behalf.

The chilling part of Google's demo is the way its voice assistant imitates a human. Not only does it respond convincingly to the questions posed by the person answering the phone - even when the conversation veers off track - but its speech is full of the umms and ahhs that normally distinguish a human caller from the automated voice bots. Google is trying to con the caller into thinking they're talking to a real human being.

You can understand why Google's done that. We've all grown so sick of automated calls from "lawyers" who have heard we've been in a car accident that our knee-jerk response to an automated call is to hang up. But at a time when trust in tech companies is at an all-time low, conning people into thinking they're dealing with a real person is a spectacularly dumb idea that could well kill Duplex before it's even been launched.

To be fair, Google seems to be wrestling with the ethics. In a faintly contradictory blog post, it says "transparency is key" to the service's success, while in the same paragraph claiming that the "technology is built to sound natural, to make the conversation experience comfortable".

I don't know about you, but I'm more comfortable when people are being honest with me. I'd have no problem with Google Duplex ringing me up to book one of my photography courses on a customer's behalf if it declared it was an automated service from the get-go. I'd be less inclined to complete the booking if I wasn't sure it was Google calling, if it was something that sounded eerily like a human being but isn't. Because no matter how good Google makes Duplex, there will always be little tells that you're dealing with a computer. The unnatural pauses; the refusal of the tech to speak over you like a human would; the absence of empathy, humour or local dialect.

There are practical issues too. When someone rings to book one of my courses, we talk about what camera they've got, how much photographic experience they have, whether they know the meeting place next to Brighton's West Pier. Duplex isn't going to know all this stuff. In much the same way, it will be flummoxed when Flavio's Saturday girl asks if you want a blow dry or whether you're okay to have your roots touched up by Gina because Flavio is on holiday in Tenerife (you can't deny my hairdresser clichs are top drawer).

But what really bites me about Google Duplex is how over-engineered the solution to this problem is. The sample conversations that Google provided are all about basic booking transactions: an appointment at the hairdresser's, a reservation at a restaurant, enquiring about the opening hours of a store. None of these should require a telephone conversation in the first place, let alone one where Google has to pretend to be a human.

I've got a Google Assistant on my desk and on my phone. If I tell it to book me a table at Pizza Express for 1 pm tomorrow, it should be able to ferret into Pizza Express's booking system, check availability, and either book me in or tell me it's full. This isn't ground-breaking - almost every ticket booking or restaurant chain website lets you do this. What we need is standardised automatic booking systems, and who's in a better position to implement one than Google?

When I can ask Google to find me the best deal on a restaurant on a quiet Monday night and it can come back with eight suggestions of places with spaces, then you've got a technology that solves a problem for me as a consumer and for the business owner. We've no need for Duplex's duplicity. We just need something simple.