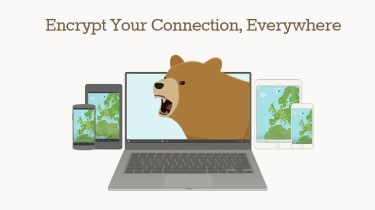 Apple ditched skeuomorphism with iOS 7, but TunnelBear didn't get the memo: all wood-effect and switches, the PC app looks like it belongs in 2013.

Worse, there's a constant mauling from bear references, such as the cutesy Little (free), Giant (monthly) and Grizzly (yearly) subscriptions each covers five devices, and at $50 (35) the latter is remarkably cheap. The twenty territories available comprise quite a balanced global spread.

TunnelBear offers in-browser plug-ins for Chrome and Opera, but doesn't allow router configuration. The app is thin on advanced options, but the Windows and iOS versions include the option to block websites that use tracking for analytics, advertising or social profiling. There's a further option to automatically connect the VPN when an unsecured Wi-Fi connection is detected.

Despite a packet loss of around 2%, TunnelBear appeared to have little impact on our connection speed. Using it we were able to view content from Netflix US, but P2P traffic is blocked altogether.

We were also less enthused about its stealthiness: DNSleaktest.com showed that it was using Google servers to resolve addresses, and a mismatch between the DNS and server locations tipped Whoer.net off to the fact we were probably using a VPN. While TunnelBear isn't bad overall, it could be more stealthy. Plus its app aesthetics quickly get old and the ursine corporate personality can be tough to bear.