You will only see what Google wants you to see 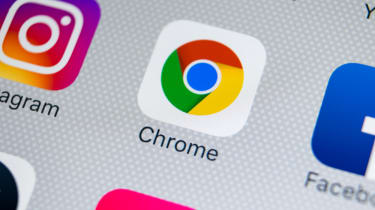 If you've managed to browse the web for longer than five minutes before being confronted with a video of a middle-aged man spouting this baloney, you're a luckier man than I am. I spend half my time writing a Minecraft magazine, and this fella pops up on almost every Minecraft site I visit, attempting to lure the kids into his get-rich-quick scam. At least, he did until recently. It seems he's been blown away...

Google, the owner of the world's most- used web browser, has said enough is enough. It's decided to root out a dozen of the most hated ad formats to "improve the web for everyone" chiefly itself. Although my 482,118-earning friend hasn't been explicitly blocked in Chrome, it seems the sites hosting him have felt the chill wind of potentially ending up on Google's blacklist and removed him voluntarily.

How can this be anything but good? Well, as I advise all young investigative reporters, follow the money.

As of mid-February, Chrome stopped "showing all ads on sites that repeatedly display these most disruptive ads after they've been flagged". How is Google defining "most disruptive ads"? Well, it's taking its cue from the Better Ads Standards, which are produced by an organisation called the Coalition for Better Ads.

The Coalition for Better Ads has a wide and varied membership. There's Google itself, which should already set alarm bells ringing for fans of conflicts of interest. Then there's the Interactive Advertising Bureau (IAB), whose members include Google. The American Association of Advertising Agencies, whose "industry partners" include Google. Not forgetting the Data and Marketing Association, which proudly lists Google on its membership list. Can anyone see a pattern emerging here?

Still, not every organisation allied to the Coalition of Better Ads is directly related to Google. Some of them are indirectly related such as the European Interactive Digital Advertising Alliance, whose participating associations include the IAB, who we've just established have Google in the tent.

In short, of the 15 organisations identified as board members of the Coalition for Better Ads, seven are either Google itself or list Google among their membership/partners.

The Better Ads Standard lists 12 formats that are the "least preferred" by consumers. On the desktop these include auto-playing video ads with sound, which is the offence my friend trying to make Minecraft fans rich has committed. But that list also includes "prestitial ads with countdown" which as the site further explains, means those ads that "appear before the content of the page has loaded, forcing the user to wait a number of seconds before they can dismiss the ad".

Now, I don't know about you, but I often click on YouTube videos where I have to wait five seconds before I can "skip the ad". Do these not count as the type of ads that are "designed to be disruptive and often stand in the way of people using their browsers for their intended purpose," which Google promises to outlaw in its blog heralding the Chrome ad blocker? It appears not. "Chrome will not block pre-roll adverts on videos for platforms such as YouTube," The Guardian reports. How convenient.

The dirty dozen ad formats listed by the Better Ads Standard also includes auto-playing video ads with sound on mobile devices. That's going to be awkward for Google, you might think, because last year Facebook decided to let videos auto-play in its mobile app, declaring that "we're always working to make Facebook a better place to watch videos". Is the Android version of Chrome going to block all ads on Facebook? That would be a no. Facebook's in-stream ads are also exempt. Oh, and guess who is another member of the Coalition for Better Ads? I'll give you a clue. It starts with an F.

It's looking like Google has cooked up a means of protecting its own revenue, and that of its pals, disguised as an altruistic act to better the web. Google's blog even has the temerity to suggest that "some sites affected by this change may also contain Google ads" and that "your experience on the web is a higher priority than the money that these annoying ads may generate even for us". Google clearly forgot to add the asterisk that said, "excluding all the ads that make us billions".

Google has worked itself into a position where it's now the judge, jury and executioner of what ads are allowed to appear on the web. Chrome accounts for 60% of web sessions on both mobile and desktop, according to the latest figures from NetMarketShare. Meanwhile, IAB figures show that of the $17.6 billion spent on web advertising in the US in 2016, Google accounts for over half. Follow the money? It's all flowing in one direction.