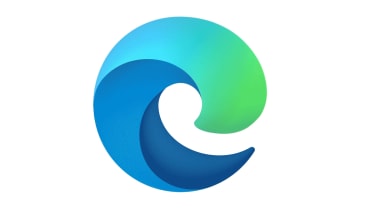 Microsoft Edge was the first major rebrand of its Internet Explorer (IE) since 1995, ushering in a completely new user interface and a raft of new features.

Since then Edge has gone through a number of changes, such as migrating to the Chromium source code and also becoming a more business-focused browser.

Edge has long been considered the default browser for Microsoft users, especially after it broke past IE in terms of market share in August 2019. However, in August 2020, Microsoft announced that it would be ending support for IE in 2021, officially marking the retirement of the legacy browser.

If you were a little hesitant about testing Edge because you'd rather wait until something has been tested as much as possible and any flaws have been fixed, worry not. With Edge, you can rest assured that it's fit for use.

Microsoft has released numerous updates to the software, including bug fixes and some major feature additions, making sure it's on par with the likes of Apple's Safari, Mozilla's Firefox and of course Google's Chrome.

Through added support for extensions and increased running speed, Microsoft has sought to refine its new browser to offer the best user experience possible. Microsoft has also recently launched versions of Edge for iOS and Android that offer synchronisation features between your mobile phone and desktop.

Microsoft is hoping to chip away at that share with a steady stream of feature and stability updates, and has already launched a long awaited Mac version of Edge earlier this year – although taking on Chrome will be a tough challenge.

Edge has a noticeably cleaner look than IE 10 or IE 11 and is very much in line with the overall Windows 10 aesthetic. Think squared-off corners on tabs, 2D design, and monochrome for the basic colouring of the browser window.

In November 2019, Microsoft released the biggest update to its Edge browser since migrating to the Chromium source code in 2018. This included a snazzy new logo and a slew of more business-focused features that brought intranet and internet search together.

With this update, company intranet directories can be accessed within the Edge browser, simply by entering a name into the Edge search bar. Searches are based on previous interactions. This also includes natural language search to find job titles, team names, office locations and also a variety of internal company information.

Other features include drag and drop search, which allows employees to drag and drop items from search results into a sharable list that comes with all the appropriate images and data for the item. This can also be exported into Excel.

One of the headline benefits of Edge is that it's now the preinstalled browser that ships with Windows 10. The obvious advantage here is that you don't need to install any third party software in order to start browsing. This isn't the case with Firefox or Chrome of course, so will save you some time if you want to hit the internet as soon as you unbox your chiny new Windows 10 machine. And the great thing about Edge is that it's not simply a browser add-on to Windows 10. It's pretty well-integrated into the entire platform, so you can use the Cortana voice assistant to perform voice searches, for example, or save information straight to OneDrive without too much hassle at all.

Another big bonus of the Edge browser is that it will present tailored content, specifically relevant to your interests, whether that be news headlines, weather reports or other content from the web that it thinks you'll be interested in, based on your web-based activities.

However, one of Edge's smartest features is the ability it gives you to write directly on the browser window - making annotations, highlighting parts of the text and more. It's a feature supported across devices, so whether you're using a small mobile screen, a tablet, hybrid or large-screened laptop, you can simply put pen to screen and annotate things you find interesting. It supports both finger and stylus, or mouse and keyboard if you wish whatever tools are at your disposal and whether you're using a touch-friendly device or not.

Tabs are also well thought out in Microsoft Edge. You're not limited to a static experience; it's much more immersive, with each tab displaying a thumbnail of its contents so you can find the one you're looking for without having to open each. These tabs can be saved into collections, saved for viewing at a later date. 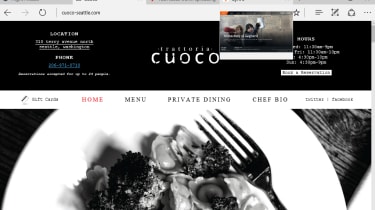 There is also a 'Set these tabs aside' button at the top left of the screen which allows you to clear all of the open tabs. The button to the side of it brings up a panel displaying all the groups of tabs you've set aside in the past, allowing you to bring them back with one click.

You can also 'mute tabs' if content is playing in one of them, rather than turning off the sound on your entire computer.

There's also a 'Reading List' feature that syncs your content between different devices as well as a useful 'Reading Mode', which makes it easier to read the content you're viewing on devices.

One of the most recent additions to Microsoft Edge, as released in the April Windows 10 update is the ability to automatically fill in personal information and credit card data when paying for goods online.

Edge was initially sneered at by many for being clunky and slow, but it's not as much of a slowpoke as you may think. In fact, it beat Chrome and Firefox in the majority of our benchmark tests, proving that it can go toe-to-toe with the biggest in the business.

Microsoft Edge also sports a new rendering engine called EdgeHTML. This replaces the Trident engine used in IE over the last couple of decades. The new browser also doesn't support legacy technologies such as ActiveX and Browser Helper Objects, and instead uses an extension system, much like rivals Firefox and Chrome.

Redmond has removed 220,000 lines of code from IE for Edge, which was formerly referred to as Project Spartan. Microsoft has also got rid of over 300 interfaces, it said in a blog post.

Many of the alterations have been made to bring Edge into line with rival browsers such as Chrome and Firefox, rather than its outdated predecessor. 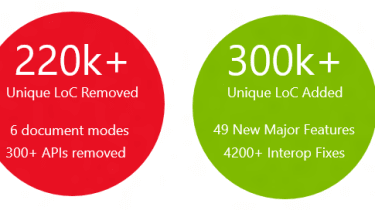 Hundreds of non-interoperable APIs have also been removed, some because they have replacements and others for the compatibility issues they pose, highlighting Microsoft's commitment to interoperability with the new browser.

The old IE is still available for Windows 10 users for now, but support will be removed in 2021. This means the IE brand will not only be behind in terms of features, but it may ultimately become a cyber security risk to use it as your main browser.