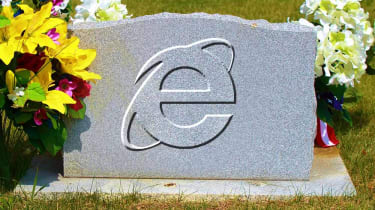 A report has revealed that 61 per cent of small business owners are still using Internet Explorer 8, 9 and 10, despite all three no longer being supported by Microsoft.

The survey, by Manta, questioned 300,000 small business owners about their browser usage and revealed that a large number have no plans for migrating to Microsoft's Edge browser.

Manta discovered that although Chrome is the most used way of accessing the internet, with 37 per cent of companies using the browser, 34 per cent of businesses still use Microsoft.

06/01/2016:Microsoft will start killing off support for older versions of Internet Explorer last week, saying the three browsers will reach their official end of life', meaning the company will stop issuing patches and updates for them.

This means a large chunk of organisations risk their networks coming under attack as hackers could potentially launch attacks using holes in the software and these will not be fixed by Microsoft.

General adoption of Microsoft'snew Edge browser has been relatively slow, with many customers opting for established choices like Chrome or Firefox over the newer offering.

According to NetMarketShare, the soon-to-be-unsupported versions made up over 20 per cent of total desktop web traffic in Q4 2015, with Edge accounting for less than three per cent.

Internet Explorer 11, which will continue to recieve support, retained the biggest single market share of any browser, however, and was reportedly responsible for just under a quarter of total web traffic.

The very last patch for the earlier iterations will introduce a pop-up that urges users to upgrade to the current version a tactic the company also used to encourage Windows 10 upgrades.

Companies still using older versions of the software for business reasons can disable these prompts via the registry.

However, the increasing litany of security flaws that unsupported, unpatched software will introduce leaves any company doing so in considerable danger.

As always, the most advisable course of action is to ensure that both you and your business are running the most current software available, with all patches downloaded and installed.