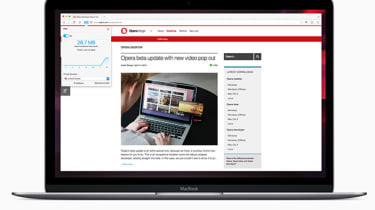 10/05/2016: Opera has updated its iOS app with a free virtual private network (VPN), enabling users to hide their web activity on their mobile device.

The browser maker rolled out a free VPN for its desktop version last month, and Opera VPN for iOS includes many of the same functions, with some differences.

Users can choose from five geographies to mask their IP address, which include the US, Canada, Germany, Singapore and the Netherlands.

The mobile browser also comes with native ad-blocking options, as well as a tracking blocker to stop websites syphoning a user's data.

However, while users get all of these functions for free on iOS, and without a subscription, Opera intends to make money from it by collecting anonymous user data and, potentially, adding advertising back into their browser.

"While we don't offer this today, we will likely introduce advertising into the application in the future.  This is just the same as playing a free game that has ads we get paid by advertisers based on our users' engagement with their ads," said Chris Houston, president of SurfEasy, Opera's VPN division.

"The other way we make money is by collecting anonymous data about how people use their mobile device. We make this information available to third parties who are interested in better understanding the mobile ecosystem and how it's evolving."

Houston added that the data it collects is about how a large group of people use their phones. But such a thing is unlikely to reassure those most sensitive about their privacy.

For the security conscious, paid-for VPN services are an alternative. Some of the iOS paid-for VPNs include VyprVPN, TunnelBear VPN and PIA.

Opera has included a free virtual private network (VPN) in the latest build of its browser, letting people surf the web with more privacy.

The VPN feature will be available in its desktop browser via a toggle setting, and users will not have to register with Opera in order to use it.

When users switch on VPN mode, they will be able to change the country that they appear to be based in currently only US, Canada and Germany are options.

Opera's free VPN service gives its users a 256-bit encryption level, and enables them to hide their IP address and access websites that may be blocked in their own country.

The service is likely to be of interest to people in countries where government spying is rife, or to users who wish to access the US versions of services like Netflix (though Netflix has made efforts to block VPN access).

"Everyone deserves to be private online if they want to be. By adding a free, unlimited VPN directly into the browser, no additional download or extensions from an unknown third-party provider are necessary," said Krystian Kolondra, SVP of Opera.

"Today, our Opera desktop users get a handy way to boost their online privacy, as well as easier access to all their favorite online content no matter where they are.".

The new functionality is chiefly thanks to Opera's acquisition of US privacy firm SurfEasy, which has previously offered its VPN service as a premium add-on to Opera.

Opera is one of the first major browser to offer a built-in VPN service at no additional cost to its users.

Currently available in Opera's latest developer build, the company is expected to roll the feature out to its public browser for desktops and mobiles in a few weeks.

Opera also announced this week that it would be ceasing development of its Windows Phone version.