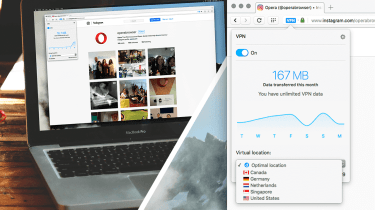 The Opera browser now includes a free VPN that you can use without logging in.

The Norwegian browser maker remains a niche piece of software in most markets, but often leads rivals with new features.

Now it is offering a free virtual private network built into the browser - the first major browser to do so, though Firefox and Chrome both have extensions that do a similar job.

Opera announced the plans in spring, but the tool is only now making its way from the developer build to the full version of the browser.

Opera said it was offering the feature built-in rather than via an extension or add-on in order to encourage more people to make use of the tool.

"We strongly believe that if more people knew how the internet truly works, they would use a VPN and we hope that by making our browser VPN free and easy to use, it will become an essential tool for everyone," wrote Krystian Kolondra, Opera Software's senior vice president of products, in a blog post.

Kolondra noted that VPNs are mostly used by "people who have a good understanding of how the internet works". The company's own survey showed only half of people asked knew what a VPN was, but 80% of respondents in the USA and Germany were concerned about online privacy.

But lack of knowledge isn't the only reason web users don't use a VPN. "More than 70% of people who knew what a VPN was but still didn't use one, when asked why, said it was because they found VPN services difficult to use and were not willing to pay for the subscription," Kolondra added.

To use the free VPN in Opera, head to Settings, choose Privacy and Settings, and then flip the button next to "Free VPN". "An icon labelled 'VPN' will appear in the browser, from which you can toggle VPN on and off, and choose a location," Kolondra explained.

You can either choose a specific location, or let Opera choose the best automatically based on network speed, latency and server capacity, the company said. You can also choose to turn VPN on all the time or only when using "private" windows. There is a limit to which countries you can choose as your virtual location, however: the USA, Canada, Germany, Singapore and the Netherlands.

The VPN tool is run by Opera's SurfEasy, and as you don't have to login to use it, neither company can store any information about your browsing history.