This Android-powered projector wants to replace your interactive whiteboard 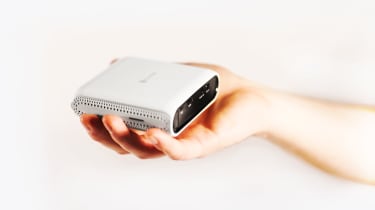 Interactive whiteboards for classrooms and offices cost around 2,000, not counting the complex set-up and projector maintenance. A cheaper alternative is the 500 Touchjet Pond. The manufacturer claims this portable pico projector can turn any flat surface into an interactive Android touchscreen.

This promise inspired hundreds of backers on crowd-funding site IndieGoGo in 2014, with Touchjet managing to raise nearly $900,000 in presales for the Pond, and the projectors are now shipping to customers.

The most impressive thing about the Touchjet Pond is the sheer amount of technology the company has been able to pack into such a tiny case. The body of the main unit measures just 3x11x10cm and it weighs just 300g. The white plastic shell has a little flex to it, but it survived a few minor drops in our testing. Its miniscule dimensions also make it an ideal travel companion if you are in the habit of giving presentations in rooms without projector installations.

What really sets the Touchjet Pond apart from other projectors is that it has a built-in computer running Android 4.4, so the interface will be very familiar to Android users. Touchjet haven't made any big changes to the way KitKat works, so its interface will be instantly familiar. This also means there aren't any extra features to assist with the slightly unusual input methods. This isn't a big problem, though, as the low resolution of 854x480 pixels means buttons and icons are very large and easy to prod.

In the box with the projector you get two styluses, which are the key to turning your projection into a "touch screen". The styluses take two AAA batteries each which should last months as they communicate with the projector via IR.

Press the stylus onto your projection surface and its IR transmitter will activate (with a visible red light). This signal is read by the IR receiver on the projector, which turns this signal into a touch input. After you've calibrated the receiver using a pre-installed app on the projector, taps feel incredibly responsive. Using apps that rely on accurate touches such as a whiteboard or drawing software feel as if you're genuinely writing onto the projection surface, which is an impressive feat. 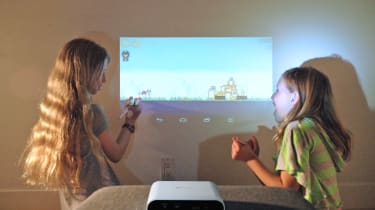 The only slight setback is that the IR receiver relies on line of sight, so you can't stand directly in front of the stylus when drawing or writing onto the projection surface. This means you have to stand off to the side, which can be a little awkward and uncomfortable.

If your projection surface is rough, like a textured wall, you can still draw without having wobbly lines caused by rough plaster or gaps between tiles by pressing a button on the stylus. You can then use the stylus by it hovering just above the surface without touching it.

You also get a remote control, which Touchjet calls the Airmouse. This works both as an IR remote which emulates keystrokes and a Bluetooth remote that controls an onscreen cursor. The latter works well and is particularly useful when you're not standing by your projection surface; you can still use Android in a relatively efficient fashion without having to leave your seat. We'd recommend avoiding the standard IR remote control mode as Android is poorly suited to arrow key-based controls; many apps don't work properly and you'll find some actions - such as playing videos from a YouTube search - impossible to select.

You can also control the Pond using your own Bluetooth keyboard and mouse, or you can plug in a regular USB keyboard or mouse into the microUSB port via a supplied microUSB to female USB adaptor.

You can also use this adaptor to move files from a regular USB flash drive onto the internal storage. There's 18GB of internal storage that's oddly divided into three partitions. Regardless, you download apps from the Google Play store just as you would with any other Android device.

Running on a dual-core 1.66GHz ARM Cortex-A9 processor, games such as Jetpack Joyride, SimCity BuildIt and video streaming programs such as YouTube and Netflix all ran relatively smoothly. It should be noted, however, that the device itself and its controllers do not have gyroscopes in them, so any apps that rely on movement controls won't work.

Inside the casing is an 80 lumen LCD lamp. 80 lumens isn't a lot, but you only need to darken a room slightly to get a usable image. We placed the projector at varying distances from different surfaces and were able to nail down adequate image quality on all of them. You'll want a flat, white, shiny surface like a whiteboard for the best image quality, but we found metal cupboards, tiled ceilings, textured walls and dark-coloured carpets to all be usable projection surfaces.

Lamp life is rated at 20,000 hours, which is four times as long as many larger projectors that use conventional lamps. The maximum image size before image quality and brightness starts to deteriorate is around 80in, which can be reached from about two metres away. Unsurprisingly, at this size and distance, you'll definitely need to switch the lights off to get a viewable image. 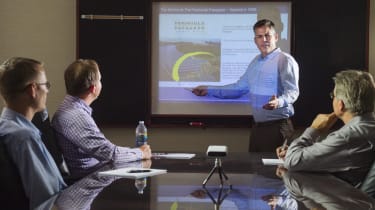 The projector has a built-in battery that can run for up to two hours in an economy mode that sets the lamp to 50 lumens. This is extremely useful if you need to give a short presentation without being encumbered by wires.

It's therefore a shame the resolution is a rather tiny 854x480 pixels. While colours are perfectly acceptable, the small pixel count means images don't hold up to close scrutiny particularly well -obviously blurry edges between onscreen objects, backgrounds and text are a particular problem.

The projector has Wi-Fi and Bluetooth connectivity along with a MicroUSB port, Mini HDMI port (cable not supplied, disappointingly) and a 3.5mm audio jack. You'll definitely want the latter (or a Bluetooth speaker) as the internal mono speaker isn't very loud. The internal fan is thankfully fairly quiet, whirring at a volume that doesn't overwhelm the speaker.

There's a lot to like about the Touchjet Pond. Its flexibility is restricted by its relative lack of brightness and limitations with its IR-linked stylus mean it can be awkward to use. Given the price however, which is so much lower than a traditional interactive whiteboard system, we're willing to forgive these faults.

It's also worth remembering that the Pond is at its best and most portable if there are Android apps that meet your whiteboarding and other productivity needs. If not you can get around this by connecting a Windows or Mac laptop via HDMI. Even so, the Touchjet Pond is a worthy alternative to far pricier interactive whiteboards.

Not perfect, but the Touchjet Pond is still worth considering for conference rooms and classrooms alike