Highly configurable and stuffed with features perfect for businesses, but not the best Wi-Fi range or speed 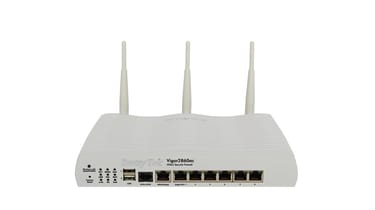 DrayTek has plied its trade for years producing wireless routers for small to medium sized enterprises - and consumers who like to tinker. With the Vigor 2860AC that's not about to change any time soon.

This router is all about function before form and it's stuffed with practical, useful features. At the front there are six Gigabit LAN ports plus one Gigabit WAN port and a VDSL2/ADSL port for connection to Openreach-based broadband connections. Alongside these is a pair of USB ports that can be used for connecting USB storage, printers or 3G/4G adapters for backup connection to the internet should your main connection go down.

There are plenty of options for connectivity, then, but the real magic is hidden away in the 2860AC's web-based administration pages, which provide access to a treasure-trove of options. Setting up the router isn't for the faint-hearted.

The UI is a little old-fashioned and text-heavy but it's incredibly comprehensive, offering everything from a proper SSL VPN server to data-limited, schedule and accumulated time-based access controls. There's even content-based web filtering, for blocking websites by category, although you do have to pay a subscription for the service after an initial 30-day trial.

DrayTek has always valued reliability over keeping up with cutting-edge network standards and that's reflected in the Vigor 2860AC. Despite the high price, it's only a 3x3 stream 802.11ac router offering speeds of up to 1,300Mbits/sec over 5GHz and 300Mbits/sec over 2.4GHz.

Wireless performance isn't great either. In our tests we saw a top speed of 54.8MB/sec over 5GHz in the throughput test at close range, which isn't bad, but in the long range test the Vigor 2860AC fell flat, achieving only 1.64MB/sec over 5GHz. That's just about enough to stream Netflix in 1080p but not much else, and its 2.4GHz performance was worse.

If you're looking for a wireless router to extend the range and reach of your network, then, this clearly isn't the router to buy; but if it's more features you need and the power to control every aspect of your wireless network you won't be disappointed.

If you're looking for a wireless router to extend the range and reach of your network, then this isn't the router to buy; but if it's more features you need and the power to control every aspect of your wireless network you won't be disappointed.