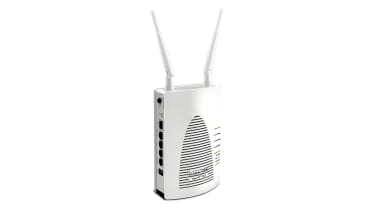 You might find it hard to get excited about a new wireless access point (AP), but DrayTek's VigorAP 903 is set to turn some heads. That's because this isn't just another Wave 2 802.11ac AP: it brings self-healing mesh technology persuasively down into the SMB price bracket, with a price of just 114.

If you want to start small, there's no need to spend any more. The VigorAP 903 will happily function as a standalone AP, with 2.4GHz and 5GHz radios concurrently presenting up to four SSIDs each. At the side, you'll also spot five Gigabit Ethernet ports; the first accepts a PoE source (although there's a power supply in the box), the next three can be used to connect PCs or other network devices, and the fifth can be employed to create an isolated LAN with its own wireless services.

Getting set up is simple. When we powered up our VigorAP 903 and logged into its smart web console, we were immediately greeted by the quick-start wizard, which insisted we change the default admin password, then helped us select the right mode for the AP and walked us through the process of creating our first secure wireless network.

Once this is done, the web console is also where you'll find advanced configuration options. You can add, remove and edit SSIDs, choose encryption schemes, enable or disable client isolation, limit the number of clients per radio or SSID and apply upload and download bandwidth limits. Alternatively, you can use DrayTek's Wireless iOS app (compatible with iOS 11 and above) for a range of tasks, from checking up on clients to configuring SSIDs and creating mesh groups.

To take advantage of that last feature, all you need to do is invest in additional APs, up to a maximum of eight per mesh network. You can then nominate one AP as the central mesh root, while the others are set as nodes and take all their settings from it, to present one set of centrally managed SSIDs. A daisy-chain topology means your network can cover a lot of ground: nodes can connect to the root AP through other nodes, up to a maximum distance of three hops.

You can also run an Ethernet cable between nodes to extend the distance further -- a great option if your company is split across two parts of a building. It can help performance, too: these units don't have dedicated backhaul radios, meaning in ordinary use client traffic has to share the available wireless bandwidth with backhaul communications, which eats up capacity.

Adding nodes to your mesh is simplicity itself. Once our new AP had been positioned as required, plugged in and booted, it was automatically discovered by the iOS app. From here a single tap connected it to the mesh; the new node ten automatically picked up all settings from the root AP (including the new admin password) and started broadcasting our predefined SSIDs.

Wireless performance is fine rather than great. Using a Windows 10 desktop connected over 5GHz 802.11ac at close range to the root AP, we were able to copy test files up to our server at an average of 48MB/sec. Moving back to a distance of ten metres saw this drop to 44MB/sec. Copying our files via a node AP 15m away from the root node, rather than through the root node itself, resulted in an overall performance drop of around 17%.

Finally, to see how well the mesh system handled a self-healing scenario, we connected three different clients to a node AP and set each one to play a YouTube video. We then abruptly switched the node off - and watched, impressed, as each client switched over to the next nearest node so quickly and smoothly that there was no noticeable interruption to the video feeds.

DrayTek's VigorAP 903 may not be the fastest AP on the market, but it's affordable, extendable and extremely easy to deploy, putting mesh wireless well within reach of even the smallest businesses.

It may not be the fastest Wave 2 AP but Draytek’s VigorAP 903 certainly makes light work of creating mesh wireless networks. It’s a cinch to deploy, offers seamless self-healing and beats the competition hands down for value.