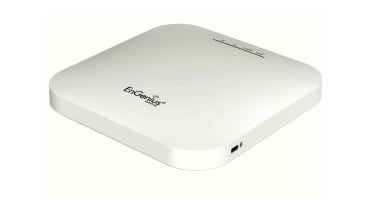 Wireless networks are about to get a lot faster. The Wi-Fi 6 specification - also known as 802.11ax to those of us who prefer the technical jargon - brings some major boosts to bandwidth and performance. It's already trickling into the domestic market and EnGenius now brings us the first business-class Wi-Fi 6 wireless AP that's priced right for SMEs.

At just 260, the EWS357AP is a tempting proposition for anyone who's eager to get on with adopting Wi-Fi 6, with competing products from the blue chips currently going for around four times as much. But don't think this is a stripped-down, corner-cutting AP: it offers a good range of features and a choice of three management methods. You can deploy it in standalone mode, manage up to 50 local units with an EnGenius EWS network switch or use the free ezMaster software to look after thousands of APs across different geographical locations.

Installation in standalone mode is simple: you just need to plug in a standard PoE source - you can use a separate PSU, but one isn't provided - and connect to the web interface. The settings are clear enough, but there's no friendly wizard to guide you through the important stuff. That's a little unfortunate, as the EWS357AP comes with a default admin password and an open SSID - both serious issues that ought to be flagged up.

Once you've secured your AP, you can create up to eight SSIDs across the two radios and enable band steering and fast client roaming. Guest networks are supported with their own DHCP server, L2 isolation and RADIUS authentication, and captive portals can be configured via the ezMaster software.

If you're excited about exploring the new Wi-Fi 6 options, you might be in for a disappointment. New features include OFDMA, 1024 QAM, BSS colouring, spatial reuse, uplink and downlink MU-MIMO and TWT - but it's almost all handled automatically, and once you have enabled 802.11ax there's very little to configure. 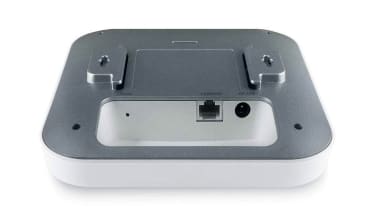 It's also worth mentioning that one Wi-Fi 6 feature is missing: the EWS357AP doesn't support the 160MHz channel width, so you won't get the highest throughput that the standard allows. Even so, there's enough Wi-Fi 6 goodness present to reduce contention and ensure a smoother wireless experience.

Performance with 802.11ac clients is good. Close-range file copies from a Windows 10 desktop equipped with a Linksys WUSB6400 802.11ac adapter completed at an average rate of 69MB/sec, dropping only to 65MB/sec at 10m. And range is excellent: the SweetSpots app on our iPad showed us still connected to the AP even when we moved up to the next floor with three brick walls in the way - although the connection speed fell to around 6Mbits/sec.

The ezMaster software is deployed as a virtual appliance in VMware. We tested it using a Windows 10 desktop running VMware Workstation 15 Player; after loading the OVA file, all we had to do was provide a static IP address and DNS details before moving over to its web interface. Here, our two local EWS357APs immediately popped up in its console for approval, while remote APs must be registered manually with the ezMaster inventory server.

Once your APs have been enlisted, you can place them into groups, which immediately defines their wireless settings. A group supports up to eight SSIDs, and lets you assign captive portal profiles, plus ezMaster, RADIUS or external Cloud4Wi authentication. You can also have users redirected to a specific web page after login, and set up walled gardens.

If you're planning to upgrade your wireless infrastructure in the near future, it makes sense to make the leap to Wi-Fi 6 - and the EWS357AP is a very affordable way to do it. It's easy to deploy, performance is good and the free ezMaster software makes it terrifically manageable and expandable as well.

If you want to future-proof your networking with Wi-Fi 6 support, you could do a lot worse than the EnGenius EWS357AP, which combines a highly affordable price with some smart management and great throughput.