Lumia 640 for business: can the Lumia 640 help Microsoft in the enterprise? 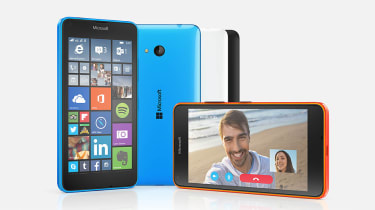 Microsoft unveiled the Lumia 640 and 640 XL at Mobile World Congress in Barcelona this week and the business features on the handsets suggest Microsoft is trying to win more of a toehold in the enterprise.

Launching the phones at MWC, Microsoft highlighted the heightened productivity features, ease of use and extended integration with other platforms and services in its announcement presentation.

Microsoft focused on the one thing only it can offer: perfect cross-device functionality with other Windows tech. The company wants to fill all your device needs, with users swapping documents, media and apps between their Windows 10 PCs, smartphones and tablets, giving you access to documents whether you're working in the office or on the move.

Of course, the Lumia 640 and 640 XL won't run Windows 10 out of the box, as the next-gen operating system won't arrive until later this year. Instead, the handsets will ship with the Windows Phone 8.1 operating system, and as with all mobile devices currently running 8.1, they'll be offered a free upgrade to Windows 10.

As an extra bonus, the company will try to tempt business users by bundling a free year's subscription to their Office 365 service with each phone, valued at 59.99. Both phones also come with the full suite of Office apps pre-installed, 1TB of cloud storage through OneDrive, and 60 Skype minutes a month for cheap international calls.

While the services and software may be impressive, Microsoft's new models feature fairly underwhelming specs under the hood. Sporting a quad-core Snapdragon 400 1.2GHz processor - the same model that was in the first-gen Moto G - and 1GB of RAM, the Lumia 640 isn't going to turn any heads based on its hardware horsepower.

The 640 and 640 XL are also equipped with a 5 and 5.7in screen respectively, with 720p HD resolutions. They're not as pin-sharp as flagship models from the likes of Samsung and LG, but given that Microsoft's targeting the enterprise space, that's eminently forgiveable, and the company's glare-minimising ClearBlack technology is a nice addition.

The lower resolution will also help to bolster the life of the batteries, which weigh in at 2,500mAh for the 640 and 3,000mAh for the 640 XL. Microsoft claimed these will comfortably power the phone for more than a full day, and based on the decidedly untaxing hardware, we're inclined to agree.

They're also sporting 8 and 13MP rear cameras and film video at 1080p. Video-conferencing also shouldn't be a problem, thanks to the 640's 1MP front-facing camera and the 5MP version on the 640 XL.

Such lacklustre specs put the new Lumias on par with mid-tier smartphones from last year. While they'll likely be adequate for most people, they'll suffer in comparison to zippier, more expensive rivals, and power users may well find themselves unimpressed.

One thing that should appeal to business users is that both phones will be available in dual-SIM 3G and LTE variants, a feature which allows users to manage both a company-financed work tariff and a personal mobile plan simultaneously. Single-SIM LTE versions of both phones will also be on offer, as well as a single-SIM 3G model exclusively for the 640 XL.

Upon its launch, the Lumia 640 will be competing directly with the newly announced BlackBerry Leap and Silent Circle Blackphone 2. However, Microsoft lacks the specialised privacy and security background of its competitors.

For many companies, making sure their confidential data is secure as possible will be of the highest priority. However, according to Kaspersky Labs' principal security researcher David Emm, "it's not the only factor it's something they will want to balance against usability and performance".

With the Lumia 640 retailing for 139 at the lower tier and the 640 XL starting at 189, they're some of the cheapest business-focused smartphones on the market. While no UK price has yet been released, current conversion rates indicate that both phones will cost less than 200 when they launch in April, even factoring in the inevitable markup.

For many companies, the mid-range specs at a budget price will be the major selling point for Microsoft's new devices, and will be more than enough to convince them to implement Windows Phone as their EMM deployment of choice for mid-to-high level employees. Whether it reaches the ubiquity of the early-2000's BlackBerry, however, remains to be seen.