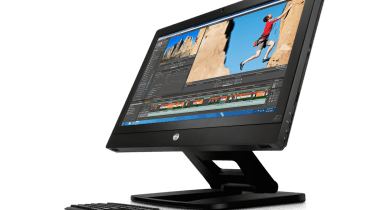 HP's original Z1 is one of the most innovative all-in-one desktops we've seen. Its screen tilts horizontally thanks to a folding stand, and the panel lifts up on hydraulic cylinders to reveal the components beneath.

The second generation keeps the same core design, which means replacing broken parts or upgrade obsolete hardware is possible. The downside is the high price, with devices going to cost you upwards of 2,000.

It's easy to get inside the Z1. Push the top of the panel and the stand folds down. Releasing two catches on the front of the screen allows the 27in screen to lift upwards.

Everything is arranged neatly, much like under the bonnet of your car. The power supply and graphics card span the entire width of the PC, with the hard disk caddy and processor heatsink occupying the central section. On the right-hand side is the memory, more heatsinks and the optical drive module. 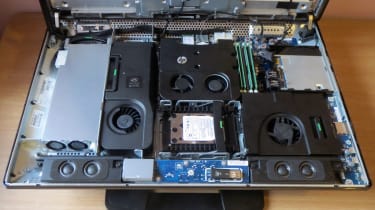 HP has redesigned every component to aid accessibility. The PSU is long and thin, and the graphics card attaches to special connections that transfer its signals to the screen. The hard disk sits inside a caddy hewn from plastic and metal, and the processor sits beneath a flat, broad heatsink.

Major components are marked with green tabs, which allow them to be popped out with one movement, and anything not marked with a tab can be removed with a few screws.

Whilst components can be replaced, there's no room for extras. The one 3.5in hard drive bay and the two mSATA slots are already occupied. The four memory sockets are all filled, and the Z1 can only handle up to 32GB of memory considerably less than proper desktop workstations. The graphics card uses an MXM connection, so you're stuck with HP's selection of GPUs you can't install your own.

The exterior is all business. There's a speaker grille beneath the screen and a plain black bezel around the panel, and there are no concessions to style.

Build quality is top-notch, which stands the HP in good stead for a long office lifespan but the Z1's strength does have downsides. Its 21kg weight is high and, from front to back, the HP spans 419mm. Its mechanisms can be tricky to use moving the screen up and down requires a fair amount of elbow grease.

Nothing about the Z1's design has changed in this second-generation system it's the components that have been upgraded but that's no bad thing. The Z1 might be heavy, but it's the market's most accessible and innovative all-in-one.

It's not just the design that's geared up for hard work. Processing grunt comes from Intel's Xeon E3-1245 chip, which deploys the Sandy Bridge architecture inside a quad-core chip with Hyper-Threading and lashings of cache. It's clocked to 3.3GHz and, using Turbo Boost, one of those cores tops out at 3.7GHz. The silicon is paired with 8GB of ECC DDR3 RAM.

Nvidia's Quadro K4100M graphics core is a mobile part that's been transplanted into a desktop-style case inside the Z1, and it comes with ISV certification, so it's guaranteed to work with numerous business applications. Under the hood it uses the GK104 core, which debuted in Nvidia's mid-range desktop cards in 2012 and has since found a new lease of life in mobile chips. 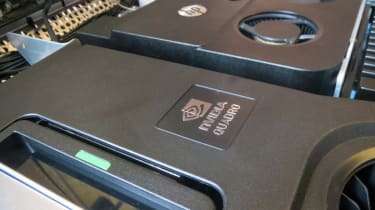 Storage is divided between a 256GB Micron RealSSD mSATA drive and a 1TB hard disk. Connectivity is good: an Intel Gigabit Ethernet controller and future-proofed dual-band 802.11ac WiFi alongside Bluetooth 4.

Exterior port selection is passable. HP provides 2 x USB 3 ports, 4 x  USB 2 connectors, audio connectors and a DisplayPort 1.1 socket. There isn't an optical drive, though. On this model we had  two Thunderbolt ports instead.

The potent components delivered high-end performance. Our overall benchmark result of 110 is superb, faster than the 102 scored by the original Z1. It's got more power than fellow all-in-one, the iMac with its 4K display, but not quite challenging the Mac Pro workstation. 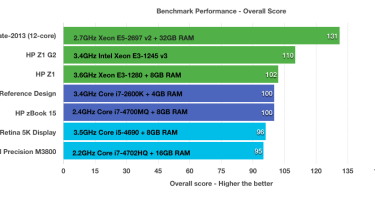 The graphics card proved its worth in the video rendering test, where it scored an excellent 128. That bodes well for graphically demanding software, and theoretical benchmarks also illustrate the GPU's power: in 3D Mark's Ice Storm benchmark it scored 115,053 points, which is more than twice the pace of systems that use Intel's HD Graphics 5000 integrated core.

The Micro RealSSD drive returned sequential read and write results of 434MB/s and 262MB/s. That's faster than any hard disk and it'll help applications remain nippy, but it's still unable to match the top tier of solid-state storage.

All-in-one systems often have thermal issues, but HP's smart design kept the components in check. The processor's top temperature of 85C is high without causing concern, and the GPU's peak of 72C is comfortable. Despite demanding stress-tests the noise was kept down even a modest office will drown out the minute fan noise and the chassis didn't get too hot, with warm air ejected through vents on the rear.

The bottom line is that, when it comes to all-in-one machines, few are as powerful as the HP Z1 but, as ever, a proper desktop tower will still be more powerful.

The Z1's 27in IPS screen has a resolution of 2,560 x 1,440. That's a great choice: enough pixels to allow for multi-window working and plenty of flexibility, and without the eye-squintingly tiny icons or upscaling required of 4K. It's not a touchscreen, and it's got a matte finish both attributes that we appreciate in an office system.

The Z1's factory settings were good, but the screen wasn't without issues. The 978:1 contrast ratio was great, but that's formed by a 411cd/m2 brightness and a 0.42cd/m2 black point both of those figures are too high. 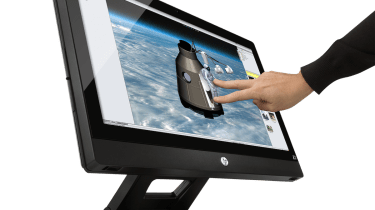 Those factory results mean the Z1 can't compete with the best work screens, but some of HP's screen modes help redress the balance. The Movie option is the top choice: it dropped the average Delta E to a stupendous 0.53, although colour temperature remained high and the brightness was still overwhelming.

We achieved the best results by dropping the HP's brightness to 211cd/m2 ample for the average office. With the lower brightness activated the black point dropped and contrast improved so blacks were deeper blacks and colours richer colours across the scale. This also made the Z1's screen ready for advanced colour work.

The Z1's screen can handle an impressive 99.3 per cent of the sRGB colour gamut, and its uniformity rarely faltered: the brightness varied by an average of less than 5 per cent across the screen, with the colour temperature altering by even less. The only negative here is the Adobe RGB gamut coverage of 73 per cent - a middling figure.

The model we've reviewed here is expensive but numerous alternatives are available, with prices that range between 2,013 and 2,431. Every one of those machines comes with an Intel Xeon processor of varying speed, and they all have 8GB of RAM. None of those cheaper configurations have discrete graphics cards, and they mix and match components elsewhere: some have optical drives, others have SSDs, while others make do with standard hard disks.

Every specification can be customised with an admiral number of alternative components. That Thunderbolt module can be replaced with a DVD or Blu-ray drive, and our powerful graphics card can be traded down for more modest models. More memory is available, different hard disks can be purchased, and numerous external accessories are offered.

The Z1 has a three-year parts, labour and next-business-day on-site warranty as standard, which is a generous package, but that's upgradeable. Defective media retention can be added for 23, and the same deal can be extended to five years for 106.

Certain aspects of HP's Z1 workstation haven't changed since we saw the first generation system, and that's fine by us: the exterior is still strong, the interior is still accessible and innovative, and the updated components still provide more power than you'll find inside any other all-in-one.

The Z1 remains almost prohibitively expensive, though at 3,491, it's more than a thousand pounds pricier than Apple's iMacs, including those with 5K displays, and it's got less power than traditional desktop towers that are also much cheaper.

This system is an impressive PC, but it's an undeniable luxury option when stacked up against its rivals. The Z1 remains a stunner but, for most people, the price of such versatility and accessibility will be too high.