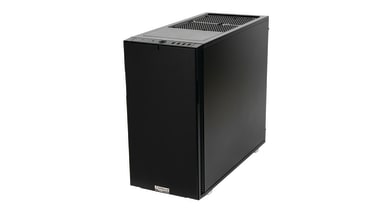 Chillblast built its reputation on powerful gaming PCs, but has been transferring its expertise to workstations for a little while now. As it well knows, there's far more to this than sticking a Quadro graphics card into an otherwise standard PC: a workstation user will be much more concerned that their system has staying power.

Fortunately, Chillblast is so sure of the Fusion Render's durability that it comes with a five-year warranty, with the first two years collect and return. That's especially reassuring, because this system is one of several that ships with a "frequency enhanced" CPU.

Its six-core Intel Core i7-5820K has been permanently set to 4.2GHz from its standard 3.3GHz, with a Corsair watercooling system in place to cope with the extra heat. As with all the other overclocked systems we've tested recently, it works extremely well, producing a stable, fast system with surprisingly little extra noise. There's Hyper-Threading onboard, too, so 12 threads are presented for applications that can use them, and it supplies 32GB of 2,133MHz DDR4 SDRAM on four 8GB modules, leaving four slots free.

Graphics come in the form of Nvidia's Quadro M4000, a popular inclusion in modern workstations for good reason. It uses Nvidia's latest Maxwell GPU and offers high-end performance at a reasonable price. The M4000 takes over from the K4200: where the latter offered 1,344 CUDA cores, the new card raises this to 1,664, a 24% increase that sees a similar boost in performance in certain tasks.

Even more significant is the doubling of frame buffer from 4GB to 8GB of GDDR5, while its bandwidth has increased from 173Gbits/sec to 192Gbits/sec. So the M4000 will be a noticeably faster card than its predecessor, but in particular it will handle larger viewsets. The only downside is that Nvidia has hobbled double-precision performance with the Maxwell GPUs. Double precision isn't widely used in 3D content creation, but some scientific and medical applications take advantage of the extra accuracy.

A sizeable 512GB SM951 SSD occupies the motherboard's single M.2 slot, accompanied by a 7,200rpm 2TB Seagate Barracuda hard disk. The SSD proved particularly fast at writing, but otherwise the storage is pretty standard for this class of machine. Note the optical drive supplied is a Blu-ray reader as well as DVD writer.

The Chillblast managed a decent showing in our benchmarks, placing above the majority of its competition and one of those above it was the rendering appliance from Workstation Specialists. It also did well in the Maxon Cinebench R15 rendering test, while its performance in the SPECviewperf 12 viewsets was nigh on identical to other M4000-equipped workstations. Most of these viewsets aren't processor-sensitive, so it's no surprise that systems with the same GPU obtain similar results. Exactly the same is true of its Maxon Cinebench R15 OpenGL result. However, its scores in the LuxMark 3.1 OpenCL test were phenomenal.

Chillblast packs all this into a serious-looking Fractal Design Define R5 chassis, a choice it shares with InterPro and Yoyotech. A door on the front keeps things looking neat, and there are eight drive bays accessible via the left side panel (seven are empty). Two SSD mounts sit behind the right side panel. These panels hinge out before removal, with two screws and a catch to secure them, making maintenance easy. The audio jacks and power button are conveniently on the front, along with two USB 2 and two USB 3 ports. It's a great chassis for a workstation.

Overall, the Chillblast Fusion Render OC M4000 is a sensibly specified, capable all-round workstation. In the current market, that doesn't mark it out as exceptional, but the extended five-year warranty adds to its appeal.

The Chillblast Fusion Render OC M4000 is a sensibly specified, capable all-round workstation. In the current market, that doesn’t mark it out as exceptional, but the extended five-year warranty adds to its appeal.