When it comes to crunching data there's no such thing as too much power. 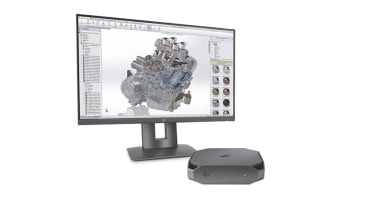 It's been a few weeks since I unleashed the power of the HP Z2 mini workstation and let me tell you it's still proving itself to be a beast of a machine!

I've had a multitude of issues over the years when dealing with large batches of data. Most common is the dreaded running out of RAM scenario I ultimately want to store as much of what I'm doing in memory, rather than having to switch it out to the far slower hard drive storage. Metaphorically speaking it's like having a beer fridge in the living room, which is really quick to get to or, walking all the way to the kitchen to fetch a cold brew. Both end in the same result but one is a far quicker route to satisfaction.

PCs I've used in the past have had 4GB or 8GB of RAM, enough to get by on if you're not an application power hungry data junkie, but that's exactly what I am and the 16GB that's packed into the Z2 mini is a Godsend. That for me is like a brewery in the living room next to my Lazyboy - there is just no reason to get up. Anyone who tells you less is more clearly isn't talking about system memory!

While having more RAM will mean that I can switch between applications quicker, or grab frequently used data in a flash, the raw speed of the Z2 mini is driven by the CPU. The metaphorical brain inside this machine, which does all the number crunching and complex computation, has the kind of cerebral power that could give Einstein a run for his money.

The Z2 option I have comes with a 7th generation Intel Core i7 processor with four physical cores, making multitasking an absolute breeze. But being an i7 chip it also has Intel's hyper-threading technology baked into it, which essentially throws four more virtual cores into the mix. It's like having a mini team of geniuses at your fingertips, each one of them performing a small part of a bigger task making processing times extremely speedy.

In this day and age a good CPU can't go without a GPU to enhance the brain's performance. The NVIDIA Quadro M620 means that the Z2 mini is just as adept at graphics heavy applications I may not be a designer, but I'm pretty sure if I was, this is the kind of workstation I'd want. But if you know anything about GPU technology, you'll be well aware that Nvidia's CUDA platform allows the power of the GPU to be harnessed for parallel computational tasks, making it the Quadro GPU an ideal partner for that Inetel CPU.

All those high-end components really show their metal in terms of sheer speed - when I have huge data sets which are far too big for excel I load them into R. You're only limited by the power of your machine with this approach. I tested loading 35 million rows of data, which took around 5-seconds to complete, To say I was impressed is an understatement. However, I really wanted to see how it would manage analysing the data and once again even when dealing with 35 million rows of data the Z2 produced results all under a minute. The CPU and GPU combination has definitely opened my eyes to the importance of using a GPU if analysing data natively on a workstation.

The Z2 really has done wonders for me, it's like going on an amazing beach holiday and never wanting it to end. Where to next for the Z2 and I?

Is your business ready for the future?